Earlier this month, we had a visitor to one of our rehearsals for the upcoming North West Area Championship Section Contest in Blackpool. Robert Lambert, an 18 year old 1st year Level 3 BTEC student at Blackpool and the Fylde College wanted to take some photos of the band as part of his current assignment:

“For this I have had to submit a series of four 3-in-1 images. Three images on one sheet is called a Triptych. The first image on the triptych has to be a wide-angled shot of a room or land, the second has to be a close up shot, for example, of hands doing something and the third has to be a shot where you can see someone’s face. This is called a 3-image-story. All my triptychs had to link up which is why I chose a music theme and because I had already done three music shoots, I decided to try and get one with Freckleton Brass Band on a rehearsal night as the fourth. As I then looked back at my four shoots, I realised I had another theme going on which was comparing traditional music to contemporary music.”

Some of Robert’s shots and his triptychs are in the gallery below, and I think you’ll agree, they capture the essence of an intense contest rehearsal. Good luck Robert with your course! 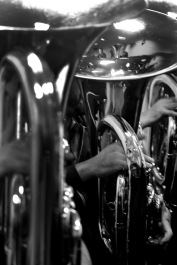 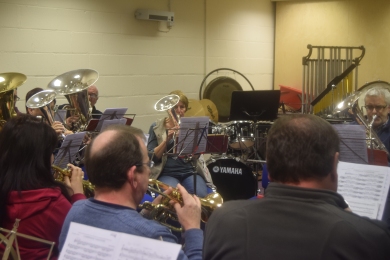