Congratulations to all the winners and thank you for supporting the band.

Freckleton Band are sad to announce that our long serving Musical Director Mr Paul Dalton has left the Band after the National Finals In Cheltenham on the 16th September 2018.

Paul joined the Band in 1980 on Trombone. In 1982 he was appointed as deputy conductor to Dennis Wright. In 1983 he was appointed as resident conductor working with Duncan Beckley, Gordon Clough, John Golland, Mike Cotter and Roy Curran. He had two short breaks during the 1980s during which he conducted Thornton Cleveleys and Darwen but then returned to Freckleton in 1995 where he was appointed Musical Director.

In 1997 the Band won its first National title at the Symphony Hall in Birmingham. During this time the band also performed many high profile concerts around the North West, including a series of concerts playing alongside the Central Band of the RAF.

Other Contest highlights include 3 invitations to the Scottish Open and 6 Grand Shield appearances.

Finally, the Band committee would like to thank Paul for his loyalty and commitment over his long tenure and wish him well for the future.

A huge well done to Poppy Taylor from all at Freckleton Band, who at just 13 years of age and already a member of the National Children’s Orchestra, has just accepted an offer to join the Hallé Youth Orchestra.

It is a tremendous achievement and one which will offer her many fantastic experiences over the coming years.

For anybody looking for something to do this coming Sunday – which is promising to be another scorcher – why not come up to Happy Mount Park in Morecambe and listen to the band.

We will be playing there at 2:30PM for a couple of hours as part of the Brass Band season of concerts that they hold every summer. Don’t forget to bring a chair so that you can enjoy the music in comfort. Maybe bring a picnic and make a day of it!

Freckleton Band will be playing in a joint concert with the Lancashire Youth Brass Band as part of the Brass at the Seaside weekend. Our concert will be held at St Thomas’s Church in St Anne’s on Saturday 14th of July starting at 7:30PM (doors open at 7PM).

Details can be seen on the poster below.

Congratulations to all the winners and thank you for supporting the band.

Several of the players took part in the fun run first – thankfully they weren’t too out of breath to then play in the band!

The weather was kind to us in the end and the band thoroughly enjoyed playing to the village.

Congratulations to John Mason who won the half marathon, completing it in an amazing 67 minutes.

With Freckleton Club Day just around the corner on June 16th, the band is looking forward to marching around Freckleton on what we hope is a beautiful sunny day.

This is always the highlight of the year for the village of Freckleton as the whole community gets together to enjoy the festivities.

This is followed on Sunday (17th of June) by the Freckleton Half marathon. Here you will be able to listen to our Youth band playing their annual concert. We will be playing at around 2 PM on Bush Lane Playing Fields as the Half Marathon and then the Fun Run set off.

The Band will be putting on a concert in the Coach and Horses Car Park on May the 17th at 8PM so please come along and enjoy our music.

We are all hoping for some nice dry weather but it may be wise to bring an umbrella as we all know what English weather is like. You may also want to bring your own chairs so you can watch in comfort as it could be standing room only! 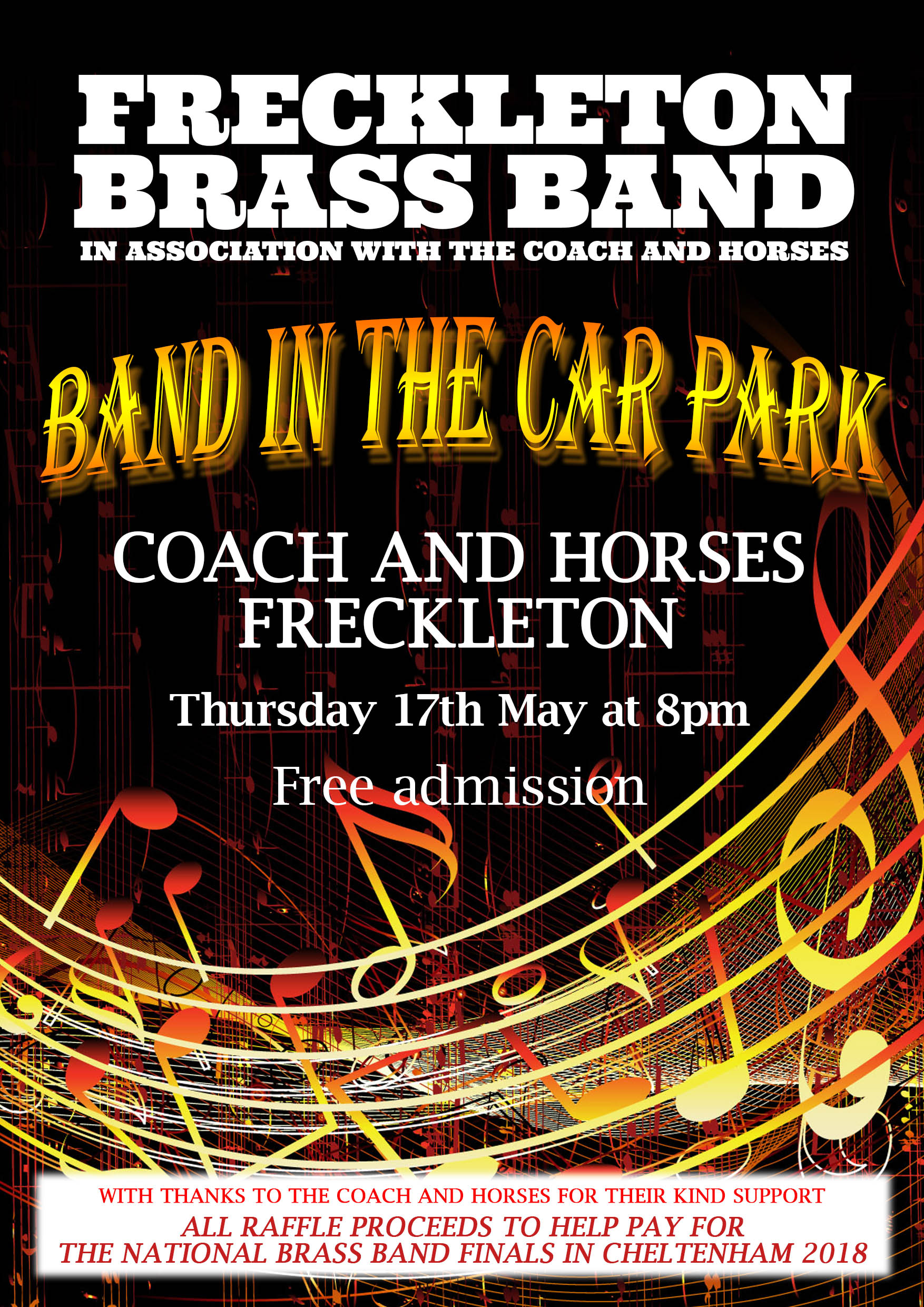 There is no admission fee but we will be having a raffle to help us raise money for a trip the Cheltenham later this year to compete in the National Brass Band finals .

Thanks for your support.