The junior band braved wintry showers on Friday evening to play carols for the Kirkham Christmas Lights switch-on. Having done several ‘solo’ engagements this season, they will be reunited with the senior band at the annual Christmas concert on 17th December at Lowther Pavilion. Please note, tickets sell out for this event, so book early! 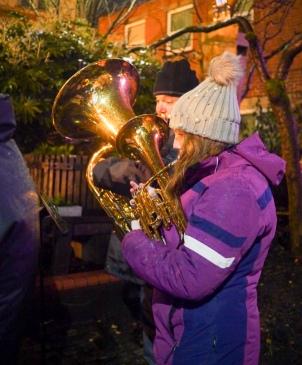 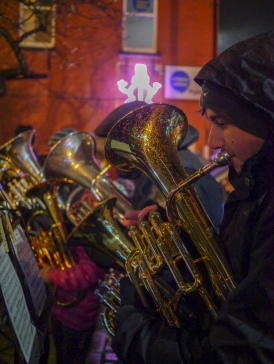 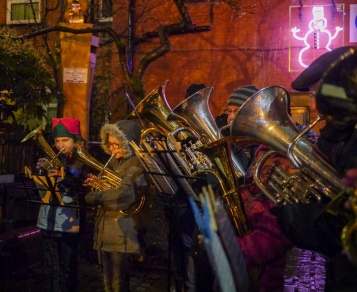 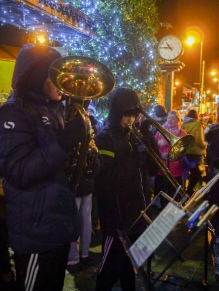 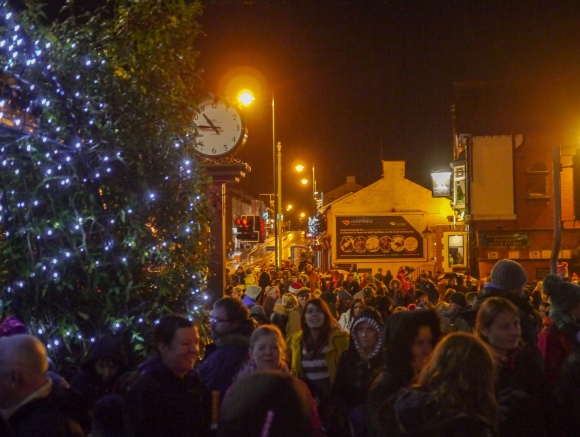 Mary Rossall has been busy putting together Freckleton Band’s contribution to the Freckleton Methodist Church Christmas Community Celebration. The exhibition is a festival of craft and flowers that represents the village groups and precedes a short candlelit Christingle Service. 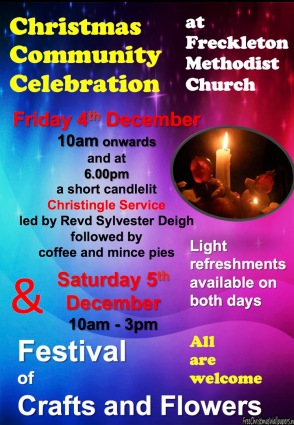 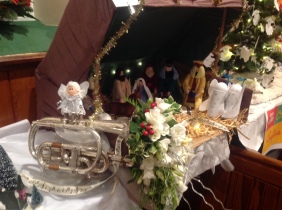 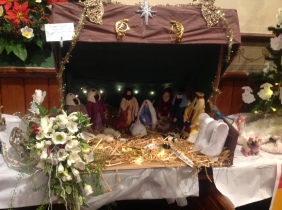 Why not pop in on Saturday 5th December between 10am and 3pm and show your appreciation of Mary’s handiwork!

On a cool but dry Boxing Day morning, a few players from the band met at the bandroom at 9 o’clock to play carols around the streets of Freckleton. Playing through until a buffet  lunch at Alan and Diane’s, the band then played the last (informal) concert of the year at a packed Coach and Horses pub.

Thank you to the people of Freckleton for supporting us this Christmas and throughout the year, without you we could not carry this tradition forward from year to year.

Derek our drummer can put his sleigh bells back in the toy box until next December! 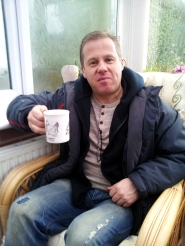 Pat enjoying a brew and biscuit 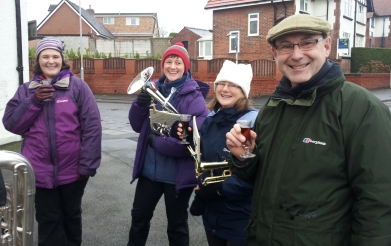 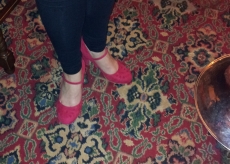 Who’s shoes are these? 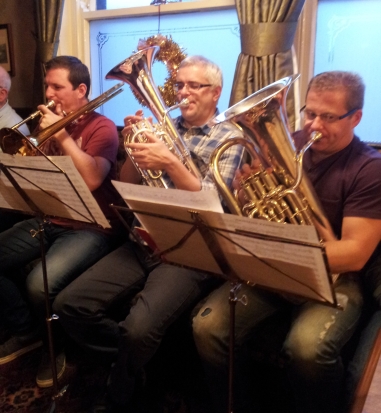 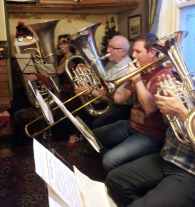 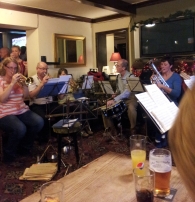 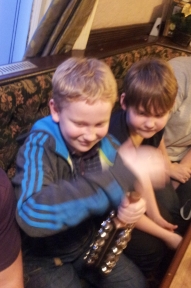 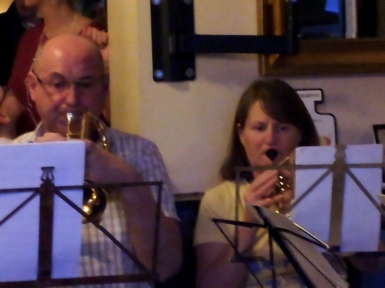 For those of you that don’t know, 3 or 4 years ago the band was recorded at Kirkham Grammar School by a touring band from America and that recording, along with a Christmas CD we gave them gets played across America from time to time.

For any of you that may be interested, the links below are to the next set of recordings due to be played. Note that you will have to work out the time differences if you wish to listen and some will be in the early hours of the morning. 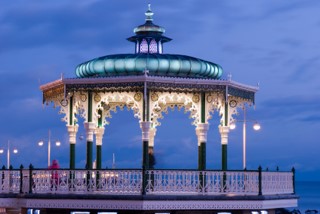 At this time of year if you haven’t been reminded of the poem ‘Twas the Night Before Christmas you are indeed somewhat isolated from popular culture. It has been part of the marketing program of countless companies and causes, “visions of sugarplums” are probably dancing in your head by now, too. I suppose my personal trainer is hoping that the “little round belly – bowl full of jelly” rhyme sticks in my mind, too.

Or, you can check our website for streaming instructions www.windandrhythm.com  and click on the “listen live” button on the front page. It will open the Public Radio Tulsa site where you can choose from the second group (KWGS is listed first) but the correct choices are listed as Classical 88.7, KWTU. There are three choices depending on your computer and software preference.

So, please join us and bring along a friend who loves band music!

The gathering place for people who love band music

Freckleton Youth Band performed their first Christmas engagement of the season on Saturday 15th November at Freckleton C E Primary School, where they played Christmas carols and songs at a busy Christmas Market. Thanks to all the youngsters, parents and helpers … Continue reading →

The band have been practising Christmas carols for the last few weeks and are pleased to be playing at and supporting a local school, as well as giving a taster of their programme for the forthcoming Freckleton Band concert at Lowther Pavilion on Sunday December 21st.

On a frosty Boxing Day morning, a few players from the band gathered to play carols around the streets of Freckleton. The rain came mid-morning, but we we able to shelter with a brew in the home of one of the villagers until the shower passed through. Playing through until lunch at Al and Diane’s, the band then played the last concert of the year at a packed Coach and Horses pub. Each year it is nice to welcome back visiting friends who played in the band and then moved away, so many thanks to Hannah and Ali for playing cornet for us today.

Thank-you to the people of Freckleton for supporting us this Christmas and throughout the year, without you we could not carry this tradition forward from year to year. Suffice to say, though, we don’t want to hear another Christmas carol for another twelve months! 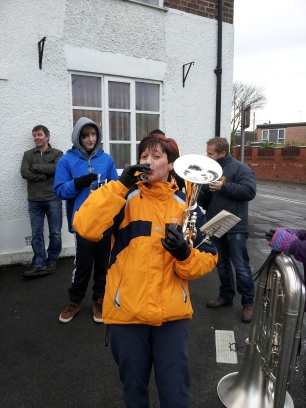 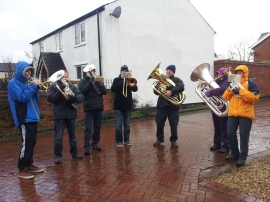 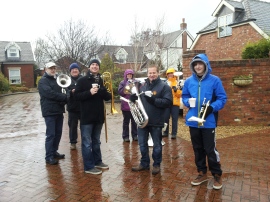 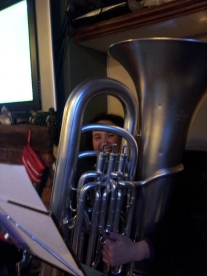 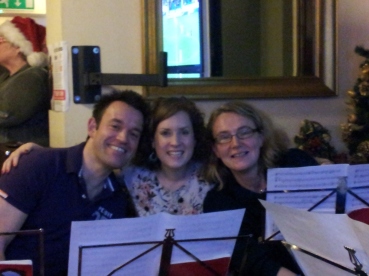 “What happens if it’s raining on Thursday when we are going carolling?”, asked one of the players. “We’ve never been rained on yet in fifteen years” came the reply. Well Thursday came and yes, it was raining. Heavily. To the players’ credit, everyone turned-up, played jolly carols and got soaked. So a big thanks to Alison for organizing the butties and pies in the pub afterwards. A hard-core elite would also go out carolling on Christmas Eve…

Anthony Roocroft’s brilliant Christmas Cornucopia poster for the annual concert at the Lowther Pavilion anticipated a great night for the band. The capacity audience were given Christmas tunes woven into selections, carols to sing along to, soloists to marvel at, new arrangements, talented young players in the youth band and of course, the raffle.

During the concert, the Youth Band awards were presented by Matt Balson and Paul Dalton awarded the Freckleton Bandsperson of the Year to Alan Brewer for his work with the band and Youth Band. The Bandsperson of the Year award was instigated in 2004 by Harry Latham who sadly passed away this year. The success of the Christmas concert has been largely down to the hard work behind the scenes done by Harry and his family for many years.

Paul paid tribute to two players for whom the concert was to be their last with the band. Chris Ratchford (flugel horn) and Caroline Cross (solo horn) have decided that, due to the pressures of work, they are leaving the band. We wish them well and hope to see them both in the future.

Boxing Day seems to be defined by tradition, and although the band has been carolling around the rural part of Freckleton since time began, the tradition subtly changes over the years. For the past four years, the band has been predominately low brass, (see here for YouTube footage in 2009) and as time goes by, the people we see along the route change. The afternoon session in the Coach and Horses is the last day of term for us where the pain of playing Hark the Herald Angels Sing for the hundredth time this year is eased with the odd beer, and we welcome back old friends who have come home for Christmas from southern lands afar.

So, as the year 2012 draws to a close, Freckleton Band thanks you for your support over the year, and we look forward to starting a fresh next year with new challenges. If you’re a player, come down and see us, or if you have a young aspiring brass player in your family, then bring them along to the Youth Band. Both the youth band and senior band start back on 7th January 2013.